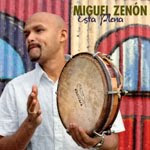 
The first thing you notice about Miguel Zenón upon meeting him is how quiet and reserved he is. That quiet and reserved demeanor begins to transform once he begins playing his alto sax. It is a somewhat slow transition that grows once he begins his musical solo explorations. It's like a fiery musical possession. Only no exorcism is needed. Miguel is a serious musician with a musical message that needs to be heard, especially by those naysayers that think jazz is dead.

Esta Plena is Miguel's fifth release as a solo artist. On this latest release he picks up where his 2005 Marsalis Music release, Jibaro, left off. Once again he is exploring the music of his native Puerto Rico, only this time its the plena. But make no mistake about it, while he stays true to the rhythms of the plena, this is truly a "jazz" recording. With this recording Miguel has reached a level as that of the Fort Apache Band, one where two musical forms meld together without overpowering the other. While the plena rhythm drives the music on this latest release, it is the improvasations of Zenón, and pianist, Luis Perdomo, along with the vocals and requinto of Hector "Tito" Matos, that shine throughout the production. This is a recording that is fully capable of satisfying both the plena and jazz audience, and more importantly introduces both audiences to each other, and to the musical possibilities that exist.

A special shout-out to Branford Marsalis, and Marsalis Music, for having the courage and foresight to release this recording, as well as others that explore all the musical possibilities out there. To quote Branford "as long as there is that handful who get it, choose to play the music on its own merits, and focus on how to sell or market it lastly, as opposed to primarily, the music will be all right." Could not have said it better myself...